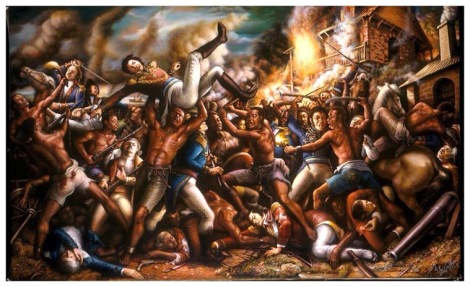 This is a working syllabus for a graduate-level course on the eighteenth- and nineteenth-century Caribbean.

Course Description: This graduate level seminar will explore three major sites of rebellion and revolution in the eighteenth and nineteenth centuries: 1.) Tacky’s Rebellion in 1760 Jamaica; 2.) The 1791 Haitian Revolution in San Domingue; and 3.) La Escalera and “The Year of the Lash” in 1843 and 1844.

The theoretical framework for this course will be founded on the Enlightenment concept of the “rights of man,” an abstract construct formulated and embraced by the European bourgeoisie in the eighteenth and nineteenth centuries. The course will begin with the readings of John Locke and Jean Jacque Rousseau, and then interrogate their philosophies with the historical revolutions and rebellions of the colonial Caribbean.

By the end of this course, you will:

Locke, Rousseau and their Issues

Week One: John Locke and the “Public Opinion” against Tyranny

Death and Rebellion in British Caribbean

Week Six: Joseph Marryat, “Thoughts on the Abolition of the Slave Trade” (1816);  Collins, “Practical Rules for the Management and Medical Treatment of Negro Slaves…” (1803);

Theory/Historical Context: Spurr’s “The Rhetoric of Empire,” Mbembe’s “Necropolitics,” Patterson’s “Slavery and Social Death,” Brown’s “The Reaper’s Garden,” Duncan Ivison “Justice and Imperialism: On the Very Idea of a Universal Standard” John McLaren: “The Uses of the Rule of Law in British Colonial Societies in the Nineteenth Century” Walvin’s “Black Ivory”

Digital Resource: http://revolt.axismaps.com/project.html (Uses extant information to map out sites of revolts during the Rebellion)

Liberty and Revolution in Haiti

Week Nine: A particular account of the commencement and Progress of the Insurrection of the Negroes in St. Domingo, which began in August 1791: Being a Translation of the Speech made to the National Assembly, the 3rd of November 1791, by the Deputies form the General Assembly of the French part of St. Domingo. London: Cornhill, 1792.

Week Thirteen: The Domingo Del Monte group, cosmopolitanism and The Poetry of Plácido

Week Fourteen: “Autobiography of a Slave”